Warning: Use of undefined constant name - assumed 'name' (this will throw an Error in a future version of PHP) in /webroot/f/o/foodpyra/foodpyramid.com/www/wp-content/themes/FoodPyramid/functions.php on line 16
 ChooseMyPlate.gov - MyPlate Dietary Guidelines

Since 1992 the United States Department of Agriculture (USDA) has provided the nutritional food pyramid, which has been the standard by which many have ascribed as far as recommended food intake. The USDA food guide pyramid that was introduction in 1992 was revamped in 2005, and became to be known as MyPyramid. Since then, there has been a change in the national view of established guidelines for nutrition. New dietary guidelines have been introduced together with a graphical representation. 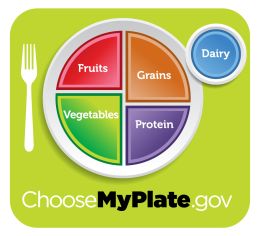 The new food guide, USDA’s MyPlate, was introduced in 2010, as the new guidelines for proper dietary nutrition. These guidelines, developed by the USDA in conjunction with the Department of Health and Human Services are designed to serve as the “cornerstone of Federal nutrition policy and nutrition education activities” (USDA Dietary Guidelines, 2011).

Evidence based, authoritative advice for Americans ages two and up regarding calorie consumption, physical activity to obtain optimal health, informed decisions about choices of food and their nutritional value, as well as ways to reduce chronic conditions and promote overall health are provided as a part of the MyPlate guidelines.

The words “Choose MyPlate” were introduced to promote the  “2010 Dietary Guidelines for Americans”. The guidelines were officially released June 2, 2011.

Why the change to MyPlate?

According to the key developers of the MyPlate dietary guidelines, changes were made in the federal nutrition program because more than two-thirds of American adults and more than one-third of America’s children are determined overweight or obese. The Dietary Guidelines for Americans, 2010 also recognizes and acknowledges that approximately 15% of American households have been unable to secure adequate food to meet their needs (Nord, Coleman-Jensen, Andrews, & Carlson, 2010). Moreover, the plate model was chosen as it is easier for individuals to understand; as the pyramid model proved to be somewhat difficult for many average Americans to comprehend.

The goal of Choose MyPlate is not to provide a specified dietary program to address any particular physical or health related condition. Rather, the goal of ChooseMyPlate is to help Americans make smarter food choices from every food group represented, strike a balance between food and physical activity that helps to use the food for energy, stay within suggested daily calorie needs, and to get more nutrition from the calories that are consumed.

Choose MyPlate describes a healthy diet as one with a focus on vegetables, fruits, fat-free or low-fat milk and milk products, as well as whole grains. MyPlate food guidelines suggest more lean meat consumption, nuts, eggs, beans, fish, and poultry; and a diet that is low in trans fats, saturated fats, cholesterol, added sugars and salt.

The Colors in MyPlate

MyPlate is made of four sections with the colors orange, green, blue and red, plus a side order in blue. Each color represent a specific food group and provides certain nutritional benefits. This plate model illustrates the importance of a varied diet with foods from each food group. The purpose with this design is to help people make healthier and smarter food choices. Let’s see what each color in MyPlate represents:

10 Tips for a Great Plate

In addition to the general information provided by MyPlate, there are 10 tips to a great plate that are easy guidelines for everyone to be able to follow. They are: