Warning: Use of undefined constant name - assumed 'name' (this will throw an Error in a future version of PHP) in /webroot/f/o/foodpyra/foodpyramid.com/www/wp-content/themes/FoodPyramid/functions.php on line 16
 The First Lady's Fitness - How Michelle Obama Keeps Fit - Food Pyramid 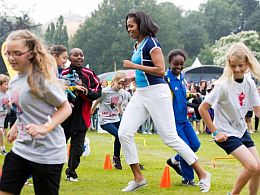 First lady of the United States, Michelle Obama, is certainly not a stranger to the world of healthy living. She has always been passionate about working hard to keep her body healthy and fit. The former vice-president of external affairs for the University of Chicago Medical Center and current first lady of the United States revealed in the April 2009 issue of O, the Oprah Magazine that she is heavily involved with several exercise routines.

“I do treadmill, I do weights…I also do some jump rope, some kickboxing – and I’d like to take up Pilates,” she told Oprah. She alluded that prioritizing exercise on the top of her list brought her happiness, which was tied to how she felt about herself. Oprah called her a ‘mighty force,’ adding that Michelle Obama’s conversation was so powerful for women.

In addition to her exercise regimen, Michelle Obama pioneered the Let’s Move! Campaign, an initiative that is dedicated to “solving the problem of childhood obesity within a generation, so that children born today will grow up healthier and able to pursue their dreams.”

How Does Michelle Obama Keep Fit?

Apart from her strict exercise regimen, Michelle Obama is also health conscious when it comes to the food she eats. She openly admitted that she does not count her calories or passes up an offer of her favorite French fries, but she eats in moderation. She has a detailed food plan in place for the chef in charge of the White House menu, and it involves lots of fruits and vegetables. She encourages kids through her Let’s Move! campaign that they don’t have to skip their nuggets, but that baked nuggets are better than fried.