Warning: Use of undefined constant name - assumed 'name' (this will throw an Error in a future version of PHP) in /webroot/f/o/foodpyra/foodpyramid.com/www/wp-content/themes/FoodPyramid/functions.php on line 16
 First Lady Michelle Obama on Larry King Show 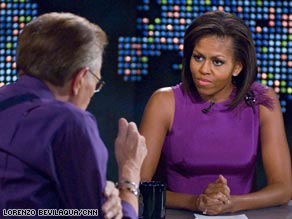 Michelle Obama has started a national movement on obesity to tackle the epidemic of childhood obesity and to make kids healthier. As a spokes person, Michelle Obama helps to provide information and tools to the American people in order to improve our children’s health.

Obama’s kids had a high BMI

On the Larry King Live show, Michelle Obama shared her own experiences with healthy eating habits. During the presidency campaign the Obama family lived in stressful environments while touring around the country. This led to poor eating habits with too much fast food and soft drinks. As a result their kids developed a little too high Body Mass Index (BMI).

Michelle Obama pointed out that the family struggled with unhealthy eating habits, even though they had access to all the information that was out there. This incident made them rethink and realize that what they needed was small changes.

Michelle and Barack Obama sat down and talked with their kids about the changes they were going to implement in their eating habits. The family talked about the damaging affect that processed foods have. They introduced healthier food and drinking choices such as more fresh squeezed juice, milk etc. The Obama parents never talked about weight gain with their children, instead they focused on balancing their diet and portion sizes.

Balancing the diet – Eat right 70% of the time

Nowadays, the Obama family eat right about 70% of the time. If the kids eat fast food on occasions, such as birthday parties, that is OK as long as they don’t eat unhealthy food on a daily basis.

The food in schools needs to be nutrition rich

On the Larry King Live show, Michelle Obama talked about the importance of a nutrition rich school food. Michelle Obama pointed out that school lunches can be a lot healthier and more nutritious. 50% of a child’s calorie intake comes from food that has been eaten in school. Therefore, it is very important that parents can rely on the responsibility of schools to provide their children with nutrition rich lunches. The positive news is that hundreds of schools are already working on improving their school lunches and this will hopefully inspire other schools to take action.

The Obama parents never talked about weight, instead they focused on eating right and changing their eating habits as well as their fitness habits. On the Larry King Live show, Michelle Obama said something very wise: “Obesity is not about how our kids look. It’s about how they feel; how they feel about themselves.”

1/3 of Americans are Obese

Michelle Obama pointed out the chocking fact about Obesity in America. 1/3 of Americans over age 20 are obese. Amongst the African and Hispanic communities the figures on Obesity are even higher; nearly 2/3 in these communities are obese!

First Lady Michelle Obama also talked about the importance of improving prevention health care, On the Larry King Live show. She explained that USA is spending billions of dollars to treat obesity-related conditions. Michelle Obama pointed out that Type 2 Diabetes, that used to be an adult disease, is today a common disease amongst the kids in America.

Michelle Obama mentioned the organization “Let’s move” on the Larry King Live show. The nationwide campaign “Let’s move” is joined by First Lady Michelle Obama, community leaders, teachers, doctors, nurses and parents to tackle the challenge of childhood obesity and to solve the epidemic of childhood obesity within a generation. In the past 30 years Obesity rate has tripled and this means that, for the first time in history, American children may not live as long as their parents. According to the organization “Let’s move”, about 150 billions of dollars are spent to treat Obesity related conditions and that number is growing…