Warning: Use of undefined constant name - assumed 'name' (this will throw an Error in a future version of PHP) in /webroot/f/o/foodpyra/foodpyramid.com/www/wp-content/themes/FoodPyramid/functions.php on line 16
 Are Organic Foods Better for Healthy Eating? - Food Pyramid 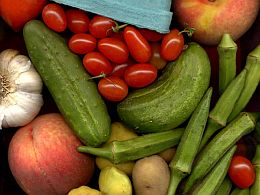 Organic foods are foods that are not cultivated using modern, industrial farming methods such as the use of pesticides, synthetic fertilizers, sewage sludge, genetically modified organisms, irradiation, or food additives.¹ Organic foods are grown by using industrial-free methods and without genetic engineering. They are also grown by depending on nature’s own methods of grooming and pest control. The U.S. Department of Agriculture (USDA) is heavily involved with inspections and certifications at sites where organic foods are grown, and there is usually a voluntary USDA green-and-white seal on packaged organic foods to help consumers identify these foods.

In the United Kingdom, a 12-month systematic study of the nutrients present in organic foods, collected from 50 years’ worth of research data (January 1978 to February 2008), has verified that organic foods are not nutritionally better (or more nutritionally deficit) than conventional or industrial foods.² The study was authorized by the Food Standards Agency (FSA) and investigated by researchers at the London School of Hygiene and Tropical Medicine.

Small differences in nutrients contained in both organic and conventional foods were observed:

These were very small differences and were mostly as a result of differences in production methods (fertilizer use and ripeness during harvest).

Although scientific evidence has not proven that eating only organic foods as opposed to industrially-processed foods is better for our health, this does not eliminate the possibility that it will be validated in the next few years. And when it comes to our health, it is better to always err on the safe side. Although they are not scientifically recognized to be better than industrial foods, there are actually some great health benefits to eating organic foods: