Warning: Use of undefined constant name - assumed 'name' (this will throw an Error in a future version of PHP) in /webroot/f/o/foodpyra/foodpyramid.com/www/wp-content/themes/FoodPyramid/functions.php on line 16
 Childhood Obesity and Ethnicity – Is There a Link? - Food Pyramid

Home » Conditions & Disorders » Childhood Obesity and Ethnicity – Is There a Link?

Childhood Obesity and Ethnicity – Is There a Link?

Issues surrounding childhood obesity have been increasingly examined in local and national media as the epidemic spreads across our nation. Some scholars and health practitioners even regard the childhood obesity issue as a pandemic. For many, this is a crisis of extreme proportion. Why are we struggling to keep America’s children healthy and who or what exactly is to blame? While these questions are sure to raise debate, there are some who suggest the answer lies in an ethnic link. 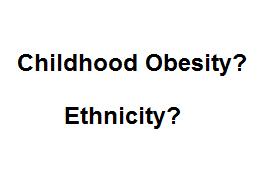 How do we define ethnicity?

It’s easy to confuse race with ethnicity. On a daily basis, the two are often used interchangeably. When it comes to linking either race or ethnicity with childhood obesity issues, it is necessary to define our terms. While race tends to refer to a group that is genetically linked, ethnicity is more of a social reference and possible, construct. It is important that this difference be defined because when it comes to childhood habits, genetic issues and social issues may afford us very different results.

1 out of every 3 children in America is estimated to be overweight or obese. There is a tendency to point the finger of blame at the parents who are ultimately responsible for the overall care of the child. Some research suggests, however, that there may be something to be said about a child’s culture, heritage and traditions when looking at concerns surrounding obesity.

The Southern United States is renowned for their cooking and traditions of large culinary gatherings. A major part of Southern culture is the communal cooking of rich foods that are consumed at vast social or family events. While these traditions are strongly rooted in the past, the health affects are very much seen in the present.

No too long ago, popular Southern television chef Paula Deen came under fire when she revealed she had been diagnosed with Diabetes years earlier. Despite the diagnosis, the famed chef continued to promote high-calorie, deep-fried southern cuisine on her show. When she revealed her condition, viewers were infuriated that such unhealthy habits were being televised despite such dangerous health risks.

If we are to look at issues of ethnicity, we must take location into consideration. This may not come down to questions of black, white, Hispanic or other as so many census forms would have us think. Instead, it may come down to regional habits. As we said before, ethnicity is often a question of social construct. How we define ourselves as regions, and the culinary habits we entertain shape our lifestyle and ultimately our health choices.

This being said, children who live in the south tend to grow up with a focus on deep-fried cooking and the joys of indulging in certain foods that over time may cause serious health risks. As we saw in the case of Paula Deen, even those well-known public figures that seem to live, breath and sleep by southern cooking happily, can fall victim to weight- related health issues.

On the other side of the coin, there are certain issues that do pertain to specific groups of Americans that may be contributing to childhood obesity issues. Medical research has shown that those of African American descent are more susceptible to health problems that lead to diabetes. Specific causes are not known, however, people who fall into this group are often closely monitored by doctors for early signs of the condition.

The March 2003 U.S. government census broke down the nation’s population by race and revealed that more than 50% of the United State’s African American population resides in the south. The remaining percentage is fairly evenly dispersed throughout the West, Midwest and Northeast. The combination of these statistics alongside major health concerns surrounding southern cooking could potentially lead to certain conclusions. If a population that is highly susceptible to weight-related health problems is concentrated in a region with a traditional focus on unhealthy food; it is not a far stretch to see a connection to obesity issues.

Looking at yet another side of this complex issue, it may be necessary to examine the socio-economic state of the nation in order to understand what exactly perpetuates childhood obesity. Sometimes it doesn’t come down to how much children eat, but what they are eating and why they are provided with the food that is placed in front of them.

So why the discrepancy between these groups? It may come down to simple numbers that are reflected in economic circumstances. Many groups of American struggle to maintain a solid, financial foundation on which to grow their families. Unfortunately, our social system is such that regional cycles are often hard to break. Pockets of our society, primarily made up of African Americans and Mexican-American families, are stuck in a cycle of poverty that has only been perpetuated by the economic crisis.

Faced with struggles of unemployment, social tensions and financial insecurity, these families are less inclined to consider nutritious choices which are more expensive and instead, turn to meals that are accessible and affordable. These choices are without a doubt, far unhealthier and lead to a cycle of low-income families becoming more susceptible to health related problems and childhood obesity. It is an unforgiving choice when a family must sacrifice health in order to sustain their children.

When we take the time to look at childhood obesity from all the different angles, it is hard to narrow it down to one determining factor. When questions of finances, social standing, race, ethnicity and region come into play, the debate is only fueled. Do you think there is a strong argument for childhood obesity being linked to ethnicity in the United States?