Warning: Use of undefined constant name - assumed 'name' (this will throw an Error in a future version of PHP) in /webroot/f/o/foodpyra/foodpyramid.com/www/wp-content/themes/FoodPyramid/functions.php on line 16
 Interesting Facts About Coffee - Food Pyramid

Did you know that coffee has been around for over 11 centuries! The Arabs traders called it quawa, the Turkish kahve, the Dutch koffie, and finally the English named it coffee.

Find out more interesting facts about coffee below and don’t forget to see the infographics at the end.

Where was coffee first discovered? 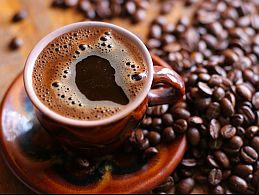 The coffee bean is a seed inside a red berry and was discovered by accident by an Ethiopian goat herder in the 9th century. The Ethiopians became aware of its benefits and made energy bars from coffee beans and animal fats. In the 17th century, Baba Budan smuggled 7 coffee seeds out of Arabia, while he was on a pilgrimage to India. It’s hard to imagine that all the world’s coffee came from 7 seeds!

The coffee had an enormous effect on the people and their legal system. For instance, the only time an Arab woman could legally divorce her husband was if he didn’t provide enough coffee! Also, coffee was banned three times during the 15th and 16th century: in today’s Saudi Arabia, Germany, and Great Britain. The British women even had a petition against coffee, saying it was turning their men into useless corpses and proposed a ban for those under 60 years of age. In the 1730s, there was even an comic opera written about a woman who was addicted to coffee, by the famous composer Johan Sebastian Bach.

How much coffee do we consume?

The laws didn’t survive the pressure from the masses who wanted coffee, and when the English chemist George Constant Washington invented the first mass-produced instant coffee in 1906, there was no turning back. The coffee was here to stay. Today, people around the world consume approximately 1.5 billion cups of coffee every day! In north America, 1/3 of the tap water is used to brew daily cups of coffee. An average coffee drinker consumes about 3 cups of coffee a day, where the average size of a coffee cup is 9 ounces.

The world’s largest coffee consumers per capita are Finland, Sweden, Norway, and Denmark. The Finns consume 12 kg per year on an average!

Flavored coffee originated in the U.S. in the 1970s. Today, the Americans spend 40 millions USD on coffee each year. An average American consume around 4.2 kg per year. However, the New Yorkers drink seven times more coffee than other cities in the U.S.!

What makes a perfect Espresso?

One of the most famous coffees is the Espresso. It first appeared in Italy in the early 20th century, but has today spread worldwide and can be enjoyed at the American global coffee café called Starbucks. So what makes a good Espresso? The correct grinding of coffee beans (macinazione), the coffee blend (misclea), the espresso machine (macchina), and of course the coffee house employee / the barista (mano), are all important if you want a great Espresso. Let’s go back to the coffe beans. A typical Espresso blend can contain both Arabica and Robust coffee species.

70% of the world consumes the mild and aromatic Arabica coffee species (originally found in Ethiopia in 1753), and 30% drinks the bitter tasting Robust coffee (originally found in Zaire / Republic of Congo 1898). The Arabica coffee has the “perfect” coffee taste, but is more expensive than the Robust coffee species. To be sure whether or not Robust has been added to your Espresso blend, take a handful of the beans and look at them closely. Arabica is larger, flatter dome, oval,and has a variant underside crease – whereas Robusta is smaller (half the size of the Arabica), round, bubble dome, and has a generally straight crease.

Is coffee good for your health?

According to research, coffee can be good for your health. It can help preventing Alzheimer’s, type 2 diabetes, gout, heart disease, and Parkinson’s (in men only). Also, people who drink six or more cups of coffee daily were 60% less likely to die from prostate cancer.

Is there any naturally decaffeinated Coffee?

Which coffee is the most expensive in the world?

The smooth and caramel tasting Black Ivory Coffee is collected from elephant feces after they have consumed the Arabica coffee beans, and it sells at 1,100 USD per kg. Kopi Lowak is excreted by a Sumatran species of wild cats, and is the most expensive coffee in the world, selling at 3,000 USD per kg!

Coffee is the second most traded commodity

Coffee trees are cultivated to be 10 feet for easy picking, but can grow up to 30 feet! Africa, Brazil, and Colombia produce over 40% of the coffee in the world. The coffee industry employs 25 million people around the world. Coffee is the second most traded commodity, after oil. 4 billion USD worth of coffee is imported by the U.S. per year, but 18 billion USD is spent on specialty coffee in the U.S. every year.

Besides, drinking the coffee, it can also be used as a fertilizer and moisturizer. In Japan, where they love their hot springs, they even have a Coffee Onsen Spa. Furthermore, scientist have found that coffee may replace fossil fuel and work in engines in the future!