Warning: Use of undefined constant name - assumed 'name' (this will throw an Error in a future version of PHP) in /webroot/f/o/foodpyra/foodpyramid.com/www/wp-content/themes/FoodPyramid/functions.php on line 16
 Does Fast Food Cause Obesity? - Food Pyramid

Does Fast Food Cause Obesity?

Obesity is now the major disease caused by poor nutrition in the developing world. In the United States, the proportion of people who are obese has doubled since 1980, with more than 72 million people now classified as obese.¹ Obesity is fast becoming a well-known epidemic.

In most parts of the developing world, people are more likely to be captivated by various forms of modern day technology which potentially decrease physical activity. Recent studies have directly linked television-watching, for instance, to the rise of obesity. But does fast food cause obesity too?

There is no single cause for obesity as people can either be genetically inclined to be obese or can become obese because of a combination of genetic and environmental factors. However, there are many factors that could accelerate this inclination to obesity in human beings. Is fast food is a determining factor? And if it is, how does fast food cause obesity? 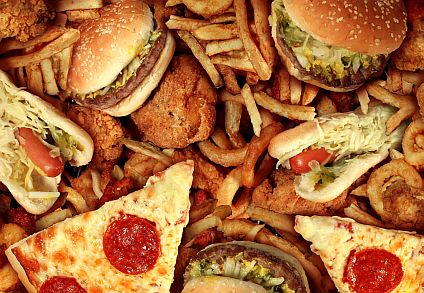 How Fast Food may be a Determining Factor for Obesity:

1. High Fat Content (High Calories): Most fast food restaurants are more concerned with their sales than the health of their customers, therefore they tend to use cheaper or subsidized food products (for instance rice, wheat, corn, and soybeans) which contain higher calories (and/or higher fat content) than the healthier options with lower calories. The U.S Government paid $12.3 billion to farmers in 2009 to enable them to meet the demands of these foods from fast food companies. The calories an average person should consume in one meal should not be greater than roughly 660 calories. However, one meal (including a cup of soda) in most fast food restaurants goes well and beyond 660 calories. Also, High-Fructose Corn Syrup (HFCS) is the number one source of calories in the United States. It is found in soda and is synthesized from the most heavily subsidized crop – corn. HFCS contains 24% water and the rest sugars. According to the Center for Disease and Control, in the 40 years since HFCS was introduced, obesity has drastically increased.²

2. Bad Nutrient Quality: A lot of fast foods have almost zero nutrient quality. If you buy a meal from one of the popular fast food restaurants, always take a look at the nutritional labels (if present). You will find out that most of the calories listed have no nutritional value. Also foods that are too high in the nutrient sodium should be avoided as too much consumption of sodium (more than 2,300mg/day) can lead to congestive heart failure, cirrhosis, and kidney disease, especially in those who are obese.

3. Large Portion Size: Portion sizes are very important to maintain a BMI within the healthy range. Most people don’t keep track of their portion sizes, but the recommended amounts per meal can be found under the “serving size” information on grocery packages or restaurant meal menus. Over-sized portion sizes contribute greatly to obesity.

Is fast food causing obesity? The answer to that depends on the type of fast food. If it has high fat content, bad nutrient quality, and if it is consumed in extremely large portion sizes, then yes, it will cause obesity.