Warning: Use of undefined constant name - assumed 'name' (this will throw an Error in a future version of PHP) in /webroot/f/o/foodpyra/foodpyramid.com/www/wp-content/themes/FoodPyramid/functions.php on line 16
 What is a Food Pyramid? - Information on different Food Pyramids

What is a Food Pyramid?

The history of the first food pyramid begins in the early 1970s in Sweden. High food prices in Sweden caused demonstrations, which in turn led the government to implement a special committee to investigate if it was actually possible to eat nutritious meals at a reasonable cost. 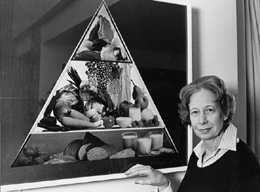 Ms. Anna Britt Agnsäter next to the food pyramid.

The Importance of Food Pyramids

The reason food pyramids are important is because they show the general population a visual example of the types of food that should be eaten every day. Most people are not educated in nutrition and diet, and a graphical representation can make it easy for people to understand their dietary needs. The food pyramid shows a healthy balance of various food groups, and it is necessary for a person to eat all of those types of foods in order to have optimal health. If certain types of foods are left out, it may result in a lack of nutrients or malnutrition.

The aim of a food pyramid is to provide a person with a practical, visual example of what a healthy diet should be. These recommendations are designed to reduce the risk of chronic diseases and improve overall health. There are guidelines that come with the food pyramids to assist you in making healthy food choices. A healthy diet prevents disease and promotes a normal Body Mass Index (BMI).

Many countries have their own version of the food pyramid, and often these dietary guidelines are slightly different from one country to the next. Environmental aspects of each country may affect the recommendations. For example, the dietary recommendations may be influenced by culture, evolution, societal beliefs, and food accessibility.

Another element that may explain the differences in food pyramids may be that there are nation-wide problems that need to be addressed through diet. Many countries are actually facing an obesity epidemic, and new dietary guidelines need to be implemented to reflect a diet that is more healthy. Certain governments recognize that the obesity problem needs to be monitored, and as a result different food guidelines are made to help people manage their health better.

It is interesting to note the differences between food pyramids in Europe and the rest of the world. Some countries have more food groups, and they focus on different types of calorie consumption. Certain food pyramids may have specific language suggesting the number of servings recommended per day, while others simply suggest eating plenty of certain types of foods and limiting the consumption of other types of foods.

Certain eating recommendations have been made for people with specific medical conditions, and food pyramids have actually been designed to represent these dietary guidelines. As an example, a person diagnosed with diabetes should not follow the standard food pyramid guidelines for the general population. Instead, their diet needs to be focused on foods that will minimize the blood sugar impact in the body.

Other dietary guidelines are suggested for specific health conditions such as heart disease, high blood pressure, high cholesterol, etc. If you have been diagnosed with a health problem, you should follow the recommendations of your doctor instead of focusing on the food pyramids designed for the general public.

The Food Circle or Plate Model

Some countries do actually not use a food pyramid to represent the dietary guidelines. Instead, a circle shaped graphic is used to represent the dietary guidelines. A good example would be “MyPlate”, which was released in 2011 by the United States of Agriculture (USDA). It is basically a plate illustrating how much you need to eat of each food group. A few other countries that also uses a food circle shaped model would be Spain, Sweden and the United Kingdom.