Warning: Use of undefined constant name - assumed 'name' (this will throw an Error in a future version of PHP) in /webroot/f/o/foodpyra/foodpyramid.com/www/wp-content/themes/FoodPyramid/functions.php on line 16
 Bone Bruise - What is a Bruised Bone? Causes, Symptoms and Treatments.

Can you bruise a bone? Well, the answer is “yes.” If you play sports, have an accident or constantly twist and/or rotate your bones and joints, then there is a good chance that you will experience a bone bruise at some point in time. Although bone bruises are internal, they can be quite uncomfortable. This article will help you understand what a bone bruise is, the symptoms, the causes and how it can be treated.

What is a Bone Bruise?

A bone bruise, also referred to as a bone contusion, typically occurs when the bone or the surrounding tissues, blood vessels and/or ligaments is injured or damaged. The trauma causes the bone to experience tiny fractures (breaks) that are often too small to detect on an X-ray. A bone bruise can occur in any part of the body that contains bones (such as the arms, neck, legs, etc.) and it can be quite painful. This type of internal bruise occurs as a result of a blow to the affected area, a sports-related accident and/or medical condition.

This type of bone injury is often found in athletes who participate in martial arts, where it is normal to block an incoming attack with the use of your arms and legs. It also occurs when a sudden blow causes the bones to hit against each other. Most of the time a bone bruise will heal without medical intervention, but it is important to note that swelling and stiffness can occur during and after the bruise heals. 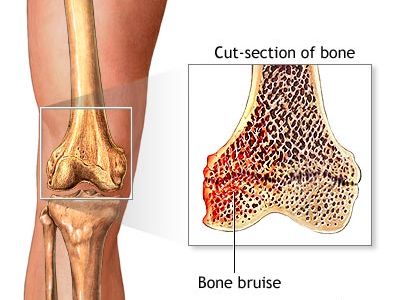 What are the types of Bone Bruises?

Bone bruises can occur within and outside of the bone marrow. They can also involve the joints, ligaments and the surrounding blood vessels and tissues. The most common types of bone bruises are: intramuscular bruises, subcutaneous bruises and periosteal bruises.

An intramuscular bruise, also known as interosseous bruising or bleeding, occurs when the bone marrow is compressed and internal bleeding occurs inside of the bone. Activities and sports (basketball, track and football) that require repetition, direct contact and intensity are usually the culprits of these types of bruised bones.

When the bone marrow is damaged, it has difficulty regulating blood flow in that area, which causes internal bleeding. Once internal bleeding occurs the bone experiences an increase in bone pressure, which can lead to edema (swelling), pain and possibly bone death. Many times, this type of bone bruise occurs in the ankles and knees because these areas hold the most weight and experience the most pressure.

A subcutaneous bruise, also known as a subchondral lesion, is a bone injury that occurs beneath a joint’s cartilage layer. This type of bone bruise arises when the surface of the cartilage is damaged causing it to separate from the bone. Subcutaneous bone bruises are caused by extreme compression (from running on hard surfaces or jumping), repetitive rotation and/or blunt force.

It is important to note that the cartilage that covers the joints is very elastic, which makes it vulnerable to trauma, injury and/or damage. When the bones become compressed, the cartilage separates from the bone and internal bleeding occurs. Bruised bones, caused by repetitive rotation, are usually sustained from either sharply twisting the bone or repetitively sliding a joint (often a knee joint) backwards and forwards.

When the joint bones repeatedly rotate it strips away the cartilage tissues and significantly exposes the bone. In some instances, a little portion of the bone may also be torn away with the cartilage.

A periosteal bruise, also known as a sub-periosteal hematoma, occurs when the blood vessels surrounding the bone are damaged and/or injured and blood accumulates beneath the periosteum, a dense, tough membrane. The periosteum not only nourishes the bones, but also protects them from injury. This membrane contains a large quantity of blood so when a bone is injured and/or damaged it causes internal bleeding between the bone and the membrane.

Older individuals are more likely to experience this type of bone bruise because their bones and blood vessels weaken with age. In some cases, the accumulation of blood in the little space between the bone and periosteum membrane causes a small painful lump to form in the affected area. This type of bruised bone is the most painful of all of the bone bruises.

What symptoms are associated with a Bone Bruise?

A bone bruise is not only painful; it may also contribute to the development of osteoarthritis. The following symptoms are linked to bone bruises: edema (swelling), pain and/or bone damage. 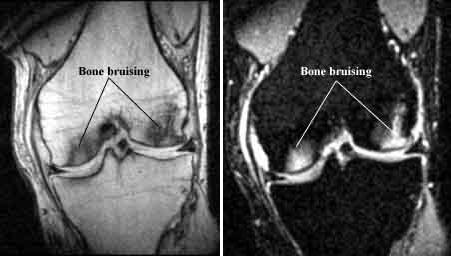 What causes a Bone Bruise?

There are a variety of reasons why a bone may become bruised such as: accidents, repeated twisting and sporting injuries.

The ribs receive the most sports-related bone bruises. Ribs bones are bruised when they receive a strong hit to the upper part of the body. To avoid bone bruises, athletes should wear protective gear (helmets, chest protectors and shin guards).

How are Bruised Bones treated?

A bone bruise treatment may consist of the following methods: ice therapy, elevation, medication and/or rest.