Warning: Use of undefined constant name - assumed 'name' (this will throw an Error in a future version of PHP) in /webroot/f/o/foodpyra/foodpyramid.com/www/wp-content/themes/FoodPyramid/functions.php on line 16
 Food Revolution wins an Emmy Award! - Food Pyramid 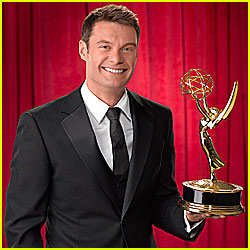 Picture: US TV host Ryan Seacrest, who led production on Food Revolution, with the Emmy.

British chef and food activist, Jamie Oliver, wins an Emmy Award for Outstanding Reality TV Program. The Emmy Award for the TV show “Food Revolution” was handed out at the Primetime Emmy Awards in Los Angeles, a week ahead of the main Emmy Awards ceremony. Jamie Oliver thanked the 650,000 people who had signed his petition calling for healthier school meals. The co-producer of the show, Ryan Seacrest, accepted the award at the Nokia Theatre on August 21, 2010 in Los Angeles, California.

Celebrity chef, Jamie Oliver, came to the U.S. with a mission to educate Americans on healthier eating habits. He started off at one of the West Virginia schools in a TV reality show which highlighted childhood obesity. Jamie Oliver wants people to sign his petition to save America’s cooking skills and improve school food. He wants to take his petition to the White House to show the President and First lady how many people really care and ask for their support.

Here is a chance for YOU to sign his petition: Jamie Oliver’s Food Revolution Petition