Warning: Use of undefined constant name - assumed 'name' (this will throw an Error in a future version of PHP) in /webroot/f/o/foodpyra/foodpyramid.com/www/wp-content/themes/FoodPyramid/functions.php on line 16
 Celebrities with Heterochromia Iridis

Have you ever seen people with two different eye colors? Heterochromia Iridis is what the condition is called. It changes the color of your eyes, and it is a condition rarely associated with any disease. Heterochromia iridis is often acquired during fetal development.

Josh Henderson, the actor who played J.R in the revival of the Dallas TV series, was born with complete heterochromia iridis. His right eye is blue, and his left eye is green. Some gossip sites state that the actor is nearly blind in his left eye without a contact lens.

If you are into Major League Baseball you might know about Max Scherzer. He is a professional baseball pitcher for the Washington Nationals.  He was born with both eyes blue. However, when he was four months old, one of his eyes changed to green. Within a year, the green eye changed color again to brown, according to an interview with Mr Scherzer’s mother.

Tim McIlrath is an American  punk/rock musician and lead vocalist for the band Rise Against. His left eye is blue and his right eye is brown.

Shawn Horcoff is a Canadian born professional hockey player currently playing for the Dallas Stars, but played for many years for the Edmonton Oilers. His complete heterochromia manifests in having the right eye brown and left eye green.

Dan Aykroyd is a famous comedian and best known for his work in the movies ”The Blues Brothers” and “Ghostbusters”. He was also born with complete heterochromia iridum. His right eye is green, and his left eye is brown.

Alicia Eve is a British born actress, which you might have seen in movies like ”Star Trek Into Darkness” and “Before We Go”. This is another celebrity with different eye colors, having her right eye green and her left eye blue.

Michael Flatley is an Irish born entertainer and famous for his Riverdance shows. His right eye is green and his left eye blue.

Cricket fans should know about this guy. The Australian born Shane Warne is often regarded as one of the best cricketers in history.  He has a set of very vibrant eye colors. Left eye in a green/yellow color and his right eye in light blue.

Russin born Ilya Kovlachuk was a 1st overall pick in the NHL draft of 2001, and spent most of his career with the Atlanta Trashers. He is still active but he is now playing for a Russian hockey team. His left eye is dark brown and his left eye is dark hazel.

Mila Kunis is an actress that you might know from the Oscar award winning movie “Black Swan”. Although she might not technically have complete heterochromia, she do has different eye colors. Her right eye is green, and her left eye is hazel. Her different eye colors developed while struggling with chronic iris inflammation, leaving her almost blind in one eye for several years. However, to correct her sight she decided to have a new lens surgically implanted. This is what can be classified as an acquired heterochromia.

Henry Cavill is an actor who is actually born in Jersey. Well, it is not New Jersey, but Jersey from the Channel Islands, UK. The British “Man of Steel” star was born with sectoral heterochromia. His right eye is blue and his left eye is partial blue with a sector of brown color.

The American actress Kate Bosworth is another celebrity with partial heterochromia. However, she usually wears contacts on film to hide her true eye colors. Her right eye is partial blue/brown and her left eye is blue.

The English actor/model/musician Dominic Sherwood does also have a change in his eye colors. His right eye is blue and his left eye partial brown/blue.

Marshall Lancaster is a British actor. Some sources state he has one green and blue eye, but what can be told from images, it looks like the right eye is blue with a hazel colored sector, and his left eye is blue.

Jane Seymour of ”Dr. Quinn, Medicine Woman” and ”Live and Let Die” was born with sectoral heterochromia. The English actress’ right eye is brown/green, and the left eye is green.

The ”Legally Blonde” star Jessica Cauffiel has a green colored iris on the right eye. Her left eye is partial green and brown.

Elizabeth Berkley is an American actress famous for her role as Jessie Spano from the TV series “Saved by the bell”. Her eyes are green, but the right eye has a brown colored sector.

The Canadian actor Liam James – known as the young “Sean Spencer” in the TV series “Psych” – was born with sectoral heterochromia. His right eye is partial brown/blue and his left eye blue.

Paris Hilton, a very famous celebrity entrepreneur, and known for being the great-granddaughter of the Hilton Hotel founder, Conrad Hilton. She has sky blue eyes with a brown shade surrounding the pupils.

The “How I Met Your Mother” and “American Pie” star Alyson Hannigan was born with central heterochromia. Both of her eyes are green with light brown inner rings.

The American actress Olivia Wilde is known for her exotic eyes. The color of her eyes are very hard to pinpoint as it shifts depending on the light. She has central heterochromia with the colors grey/blue with green inner rings.

The American actor and Oscar winner Joe Pesci is famous for his roles in “Raging Bull”, “Casino”, and the “Lethal Weapon 2 -4” movies. Both of his eyes are blue with a shade of brown surrounding the pupils.

Terrence Howard is an American actor that you might remember from the movies “Hustle & Flow” and “Ray“. His both eyes are green with brown inner rings.

La La Anthony is an actress/business woman/author married to the NBA star Carmelo Anthony. Both of her eyes are grey with brown inner rings.

Other Celebrities with Heterochromia

There are several celebrities with heterochromia, but the vast majority with this condition have either partial or central heterochromia. In most cases you can hardly even notice the difference in eye colors.

Some articles mention that Christopher Walken, Simon Pegg, Kiefer Sutherland, Demi More, Benedict Cumberbatch, have two different eye colors, but that is not true. What might be true is that they might have partial or central heterochromia, and in some cases it is only a slight variation in eye color.

David Bowie is another celebrity that is often mentioned having heterochromia. He was actually born with blue eyes, but when Bowie was a teenager, he got into a fight over a girl with his best friend George Underwood. The friend was wearing a ring while punching Bowie, causing great damage to Bowie’s left eye. Bowie had to stay out of school for eight months due to operations that were needed to fix the eye. Unfortunately, the doctors couldn’t fully repair his left eye. His color vision was mostly lost, leaving him with a faulty depth perception, and a permanently dilated pupil (a condition called anisocoria). As a result, his eye colors is commonly mistaken to be different when in fact it is the dilated pupil that is causing the illusion. 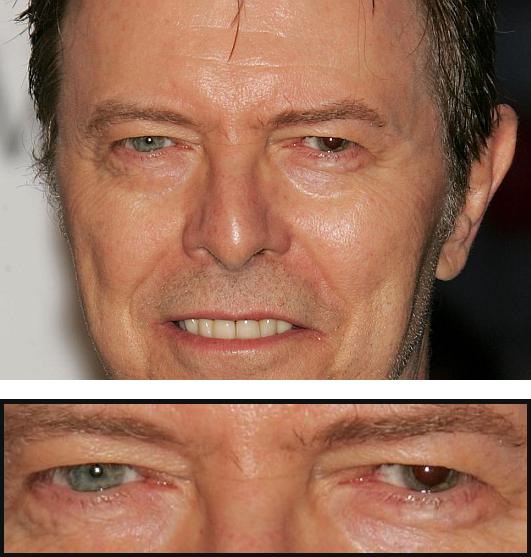