Warning: Use of undefined constant name - assumed 'name' (this will throw an Error in a future version of PHP) in /webroot/f/o/foodpyra/foodpyramid.com/www/wp-content/themes/FoodPyramid/functions.php on line 16
 Allergy Season - Top 5 Summer Allergies - Food Pyramid 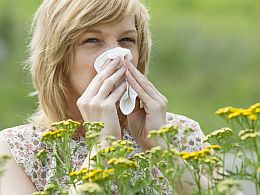 Every summer, a significant number of people present with various symptoms which are known landmarks of allergies. Allergies occur due to hypersensitivity of the immune system to substances in the atmosphere. As a result of the current changing climate, the spring and summer seasons are getting warmer. Warmer weather makes for longer periods of blooming, which in turn can lead to bad allergy seasons.

During the 2012 annual scientific meeting of the American College of Allergy, Asthma, and Immunology (ACAAI), Dr. Leonard Bielory, a professor of environmental prediction at Rutgers University, predicted that by 2040 there will be 1.5 to 2 times the amount of pollen we have now.¹ In some individuals, pollen is one of the major attackers of the immune system, as listed below.

According to ACAAI, we can categorize certain allergens into top 5 causative factors of summer allergies²:

1. Weeds: Weed allergies usually occur in late summer and early fall. The main weed that causes allergies is ragweed. It has 17 different species and can be found across the nation. Ragweed pollen season occurs from August to November, but peaks in mid-September. Other common weeds that cause summer allergies are sagebrush, pigweed, and goosefoot pollen.

2. Mold: Mold is synonymous with fungi. Mold can occur all year round because they thrive in dark and moist locations. They are commonly found indoors in places where fresh foods are stored. They reproduce by producing spores that can cause allergies. Airborne spores are usually due to the degradation of leaves and other biomaterial. They are common in soil, decomposed vegetation, and rotten wood. Indoor molds can lead to worse problems such as asthma.

3. Dust Mites: Dust mites are microscopic arthropods. They usually feed on human skin scales. Seasonal changes in relative humidity can increase the concentration of dust mites in the home. In summer, the relative humidity changes allowing mites to cause summer allergies. Cold, high altitudes are unfavorable to their growth. Dust mites cannot be completely eliminated due to cleanliness.

4. Grass: Grass allergies usually occur in late spring and summer. Common grasses that cause summer allergies are Bermuda, Johnson, and Kentucky bluegrass. Others are orchard, sweet vernal, and Timothy grass. The grass itself might not be harmful, but chemicals applied to the grass might cause allergies. Examples of these chemicals are fertilizers, insecticides, and herbicides. Asthma patients can have major complications from grass allergies.³

5. Trees: In some states, pollen can be produced as early as January, and in others as early as April. One main tree predominant in the United States that produces pollen is the oak tree. Other trees that produce pollen are cedar, juniper, cypress, and sequoia. Some others are elm, birch, olive, sycamore, and poplars. Pollens from trees can travel many miles away from their original source. Pollens are a major source of summer allergies causing bad allergic reactions in many people.