Warning: Use of undefined constant name - assumed 'name' (this will throw an Error in a future version of PHP) in /webroot/f/o/foodpyra/foodpyramid.com/www/wp-content/themes/FoodPyramid/functions.php on line 16
 5 Major Diagnosed Mental Illnesses - Food Pyramid 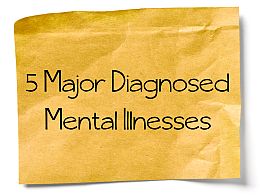 According to the World Health Organization (WHO), mental illness is the leading cause for disability in both the United States and Canada. In the United States, qualified medical professionals diagnose mental illnesses by using the standard Diagnostic and Statistical Manual of Mental Disorders, fourth edition (DSM-IV). A revision of this manual, DSM-V, was released during the American Psychiatric Association (APA) annual meeting in San Francisco on May 18, 2013.

The following are descriptions of the five major diagnosed mental illnesses:

1. Attention Deficit Hyperactivity Disorder (ADHD): ADHD is a condition in which individuals cannot focus or pay attention and are very easily distracted. It could occur with or without hyperactivity. ADHD affects 4.4% of adults in the United States. It is one of the most common diagnosed mental illnesses in children and adolescents.² From 1998 to 2009, ADHD was diagnosed in about 10% of children.3 Individuals diagnosed with ADHD show an onset of symptoms before the age of 7, usually as a result of significant social or academic impairment.³

2. Autism: Autism is a medical illness that presents with abnormalities in social interactions, lack of communicative skills, and repetitive behavior. As many as 400,000 in the United States are estimated to have this disorder. Autism affects how the nerve cells in the brain are connected and organized.

3. Bipolar Disorder: Bipolar disorder, or manic depressive illness (MDI), is characterized by a significant level of prolonged depression that oscillates between elevated and irritable moods. Individuals with this disorder usually have a decreased need for sleep and exhibit reckless activity. Patients diagnosed with several bouts of depression might have bipolar disorder.

4. Major Depressive Disorder: Major depressive disorder is characterized by series of low moods and feelings of low self-esteem. Low moods usually affect different aspects of the life of an individual with this disorder. Studies show that this disorder is common among adolescents. The results of surveys show that the majority of individuals who will have MDD will do so by early adulthood.

5. Schizophrenia: Schizophrenia is a compound medical disorder that consists of several mental illnesses. The major symptoms are auditory hallucinations and delusions. In schizophrenia, there are abnormalities in the ventricles and dopaminergic systems of the brain. The onset of the disorder is in adolescence and usually remits in old age. Individuals with this disorder have a 5% lifetime risk of committing suicide.